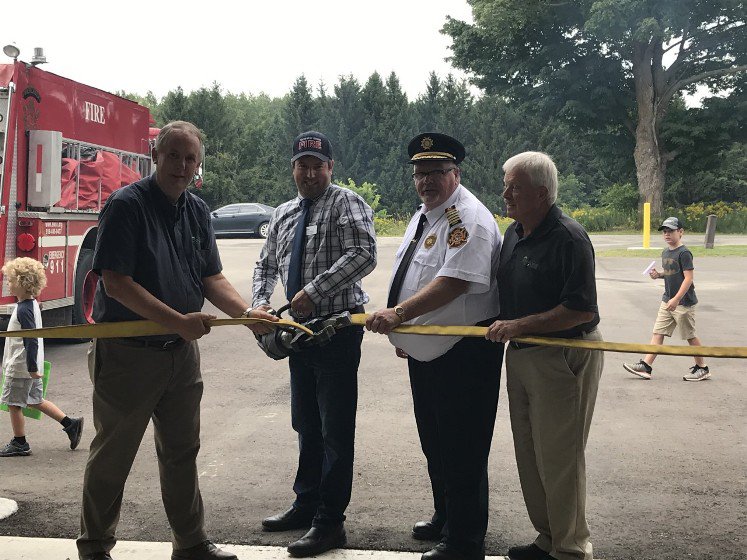 The Ribbon has been cut on the brand new fire hall in Beachville.

BEACHVILLE - The Ribbon has been cut on the brand new fire hall in Beachville.

Several people came out on Saturday to enjoy a BBQ and several different firefighter exercises, including rope rescue and ladder training, how to use the Jaws of Life and some of the indoor training they are able to do in the new building.

"This building is here to serve the whole community, this is the third of our three fire halls that have been replaced over the last couple of decades and it was built with the future in mind and we want to make sure we can serve the needs of the community over the long term. We wanted to make sure we had a good facility that was good for training."

"The old hall only had two bays and three trucks, so it was a bit of a challenge to get the fella's out on the road and get to where we wanted them to be. It always took a few extra seconds, we wanted to build this hall so they didn't have those same challenges. It was also a bit more cramped for training, kind of limited them in the training they were able to do, only having one small room."

Fire Chief for the station Lilly White says they are really happy with the new building.

"So when we have big instances, like for example a multi vehicle collision on the 401, now we have a facility where people can come and stay, that is really good because you don't want to leave them there. We have a lot more room at this station, it is a lot better then what we had before for training, really everything, it's great."

The hall has been opened for just over a month and the Township was  happy to host the community for the grand opening on Saturday.