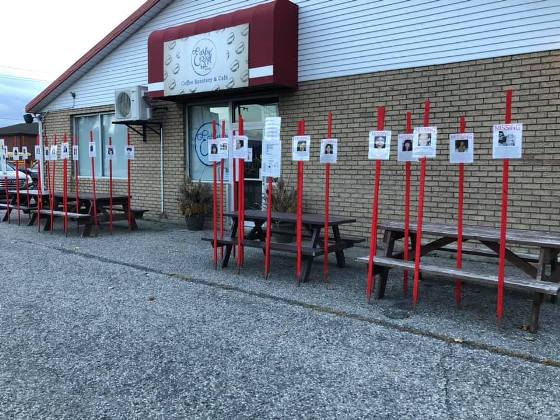 Early Bird Coffee generated a lot of discussion this weekend by displaying posters of murdered and missing indigenous women and girls in front of their shop.

WOODSTOCK - Early Bird Coffee in Woodstock generated a lot of discussion this weekend by posting pictures of murdered and missing aboriginal women in their parking lot.

Kate Leatherbarrow owns the shop with her husband Elio Caporicci and she explains how this idea came about over the weekend.

"We were kind enough to get the signs that were made by a local Woodstonian, Selina Myers, that was bringing awareness to missing and murdered indigenous women and girls in Canada."

They're are over 4000 missing or murdered indigenous women and girls in Canada. Early Bird had 32 posters set up out front of their shop on their picnic tables. They were on display the entire weekend. Leatherbarrow says the company made a decision to have these types of conversations in the Spring.

"We decided as a business, to use our voice and platform to try to bring awareness to marginalized groups, individuals who have had a tougher road, or different demonstrations that we felt our community should know about. We thought coffee creates conversation, so why not allow the people who we have walk through out door embark on this journey with us."

Early Bird plans to host these fundraiser's 4 times a year. Over the weekend they were able to raise $1,385 for the Native Women's Association of Canada. Leatherbarrow says the reaction from the public on the weekend was amazing.

"It was positive through and through, we didn't have one negative experience, we heard from a few people that it was a bold statement but people were impacted, they were compassionate, they know more about this now, in the last few years than ever before and I think weekend was a big success."