Honouring One of Their Own 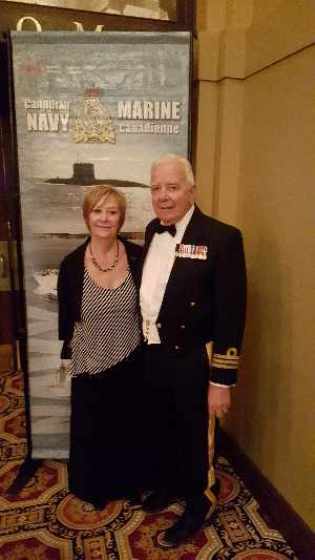 The late Commander David Stock will be recognized for his service by the The Woodstock Sea Cadets.

WOODSTOCK - The Woodstock Sea Cadets are going to commemorate one of their former members who recently passed away.

The local organization is looking to honour the late Commander David Stock by changing the name of their building.

Sub Lieutenant and Officer of the RCSCC Woodstock Doug Hannon says Stock contributed so much to the Sea Cadets.

"Since I've been in the Cadet Corps for the last eight years, he has been at every one of our major events, annual inspections, he has sponsored us financially and he also has been an inspiration for all of my senior cadets. He has shown the utmost respect, honour for our cadets. For the Navy League, we had a cup which is the David Stock Award, which is the most proficient, basically the best of the best of our cadets because David Stock exemplified that. He worked tirelessly. Whenever we asked him for help there was never a no, it was 'where do you need me? What do you need me to do?'"

Hannon says they want to change the name because Stock was instrumental in getting the building. It is currently located at South Side Park.

"He was simply instrumental in getting us our building we are currently in after we had to leave from the other building, which was at the Fairgrounds."

Hannon says Stock was a member of the Canadian Naval Reserve and served on more than a dozen ships on both of their coasts. Before he retired, Stock was an Executive Officer of a reserve unit, where he was in charge of people's placement.

The community organization wants to change the name of their building from the Ship to the Commander David Stock Cadet Training Facility.

Mayor Trevor Birtch says the late Commander meant a lot to the community.

"He has been a very prominent member behind the scenes in the community, helping youth and other initiatives, and especially with the Navy League and the Sea Cadets. To see the Navy League and Sea Cadets come forward and asking that their location be renamed the Commander David Stock Training and Education Centre is something that I think council will definitely get behind."

Birtch says that should the facility move to another location at any point in the future, the name of the building will also go with it.

"With the way that council would look at this naming, it is not actually a specific naming of an individual building, it would be a naming and a dedication of wherever the Sea Cadets and the Navy League do their meetings. At this point in time, they are located at the Ship at South Side Park and this legacy will continue for generations to come."

Hannon adds that Stock dedicated a lot of his time to the Sea Cadets and received full support from his family, including his wife Gloria. Stock passed away a couple weeks ago.

The organization will look to hold a dedication ceremony in September later this year. Meanwhile, Hannon will give a presentation to Woodstock City Council tonight.

Hannon says re-naming the building will not only make the cadets proud to have known Stock, but to also continue his legacy.

"The Ship is one thing, calling the Ship is a generic form. Giving the name will not only give pride to the cadets that knew him, but give the cadets, upcoming, a sense of commitment. Commander Stock gave us a legacy. The building is a place where we can continue that legacy of community work, of community responsibility."