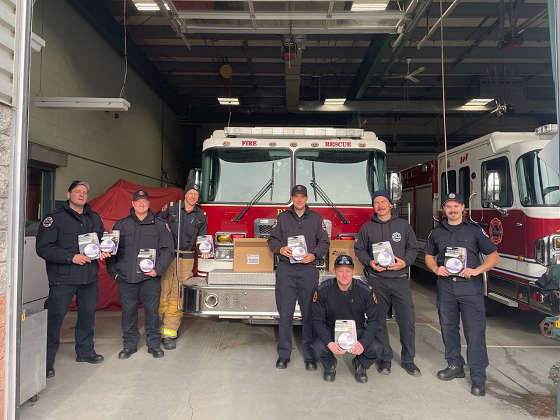 Ingersoll Fire Chief, John Holmes talked to us about what this program is and what it gives to the community.

"In a joint effort between Enbridge Gas and the Fire Marshal's Public Fire Safety Council, they donated combination smoke alarms and carbon monoxide alarms into many communities throughout Ontario and the town of Ingersoll was selected to be part of their program to donate the detectors into the community."

Holmes also talked about how they decided where to spread the detectors.

"There wasn't any specific target area so what we did was take a look at the different areas of town. The detectors that we got were battery operated, they weren't hardwired detectors, so we looked at the age of the homes in some of the older neighbourhoods and thought well where are we gonna get into old enough construction that alarms that are in the house are not hardwired into the house?"

People were a little surprised to see firefighters at their front door on Saturday. Holmes says they tried to target older homes, that wouldn't have wired smoke detectors.

"The reaction of the people at first was a little bit of hesitancy and you know, why the heck are these firefighters standing on my front door, and then once they started a conversation we were welcomed, had a look and made sure that everyone's alarms were up to date and if they were anywhere within that 10 year target they replaced the alarms that were there certainly if they were outdated and didn't work then the fellas would replace them and have a conversation with the homeowner surrounding the importance of the alarms and how it's important to be up to date on their replacements."

The fire department handed out over 100 of the free smoke detectors last Saturday, and they plan to give out the remaining 15-20 to people who need them. Holmes, notes just how important it is to have a working smoke and carbon monoxide detector on every level of your home.

"The early warning is the key to surviving either a house fire or carbon monoxide leak in your home. So that's potentially 100 or so homes that there may have been a tragic story that is now hopefully meant to be avoided."

Housefires bring tragedy to many families all over the world. One of the best ways to prevent the loss of lives during these tragedies is to have a working smoke alarm installed in your house.