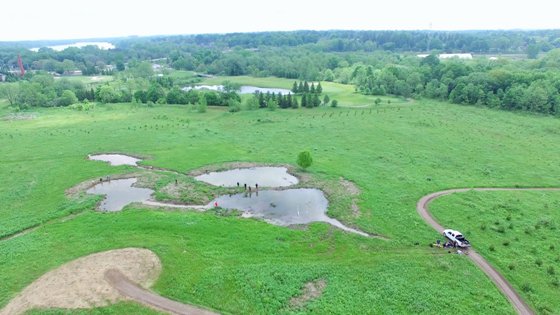 Conservation Authorities across the Province are worried that a section of Bill 229 opens the door to development on flood plains, wetlands and natural areas.

ONTARIO - Conservation Authorities across the Province are speaking out against Bill 229 from the Governing Tories.

"Bill 229, specifically they call it schedule 6 in the back of the bill changes the rules in Ontario about how development can proceed. Right now, if people want to build a house, or a commercial building, on of the checks on approving that building is the Conservation Authority gets asked if it's safe. What we mean by that is it safe from flood risk, erosion risk, does it compromise a wetland and that relates to flood protection as well."

Wilcox says they are worried this opens the door to development in flood plains, wetlands and natural areas.

"Bill 229 changes the rules and allows the Minister of Natural Resources to over ride the science based opinions of a Conservation Authority about whether or not a development could or should proceed because of concerns about public safety. Our concern is this just opens the door to development in flood plains, wetlands and natural areas. The system in Ontario has been incredibly successful for decades because municipalities and Conservation Authorities have had a planning system that protects those areas and protects people and we are worried that is being thrown out."

Wilcox says the system in Ontario has been successful for 70 years because they have a system in place that protects those areas and protects people. He also wanted to make it clear they are not against new development.

"There seems to a perception sometimes that Conservation's are anti development but I got to be clear, when we review development applications, we approve 98 percent of them. Developers and land owners know the rules in Ontario and we work with all parties to try to come with ways to ensure that a development proceeds safety. I do think the system works and we are open to improvements and I thought that is what we were heading towards but honestly, the way Bill 229 came out, it was more of a sledgehammer solution than anything and that has been disappointing and really concerning for what we feel has been a 70 year legacy of real success in Ontario and all of that is in jeopardy for sure."

Bill 229 passed into law on Tuesday. General Manager of Conservation Ontario Kim Gavine says the Bill included new powers for the Minister to bypass conservation authorities and issue permits as well as curtailing the CAs’ ability to appeal to the Local Planning Appeal Tribunal.

“The Budget Bill is all about financial recovery from pandemic conditions and this could have easily been accomplished in ways that didn’t sacrifice Ontario’s environment and our unique watershed approach. A more proactive approach may have been to use this bill to support the development of a stream of new, greener economic activities that would boost the economy and help to build environmental resilience, not break it down.”