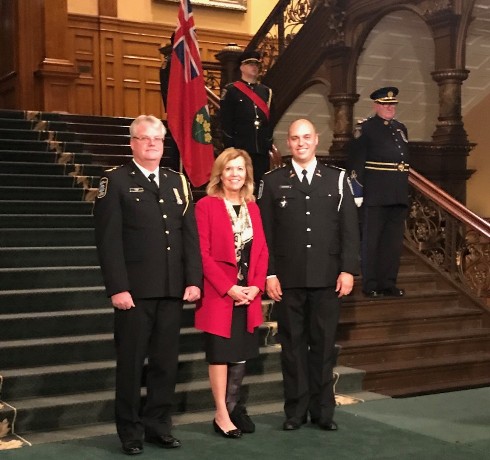 An Oxford County Paramedic was presented with the Ontario Award for Paramedic bravery Last week. In June, Joe Vandermeer leapt from a moving vehicle to prevent a woman from jumping off an overpass on the 401 in Woodstock.

WOODSTOCK - A local paramedic has been honoured for his heroics in Woodstock.

Joe Vandermeer an Oxford County Paramedic was presented with the Ontario Award for Paramedic bravery Last week. In June of this year, Vandermeer leapt from a moving vehicle to prevent a woman from jumping off an overpass bridge on the 401.

Vandermeer explains what was going through his head when he was confronted with the incident.

"It just felt like an instinct to notice the potential for danger and to hop out and try to keep the scene safe and keep the patient safe, obviously I didn't know exactly what was going to go down but thankfully with the years of training everything worked out."

Vandermeer adds that without the help from first responders this feat would be impossible.

"It was definitely a team effort everybody from the OPP, the Woodstock Police, to the Woodstock Fire Department, and without everybody on scene there at different points and in different areas it wouldn't have been possible to help this lady, I just happened to be the person at the right place at the right time before she decided to dart towards the bridge."

Vandermeer says it was truly an honour to receive this award last week at Queen's Park.

"It was great to get the honour and very humbling, I guess working in the field for quite a few years we don't expect that, and me along with every other person would just say that we're doing our jobs so to be recognized in any manner is just great."

Vandermeer has personally struggled with PTSD in relation to this incident. He says he has been to find help, through a number of programs offered by Oxford EMS.

"We have a peer support group with Oxford EMS specifically, and unfortunately it's a relatively new thing that is being recognized and so a lot of that stuff is relatively new, but I think there's help out there and I think the unfortunate thing is that a lot of first responders don't see that there is help so you know it really takes a team approach from peers at work, at home, family and obviously management staff as well to be able to get people the help they need."