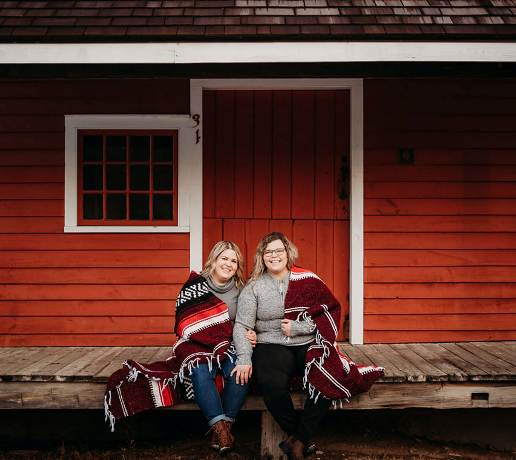 A same sex couple from Woodstock was trending yesterday on social media after a story broke about a wedding videography company from Brantford, who refused them service, because of their sexual orientation.

UPDATE: This story does have a happy ending.

Wedding videographer Nick Maxwell has reached out to the couple and offered to shoot their wedding for free. Kelly and Mallory have said yes and are looking forward to their big day next October. Maxwell says he was happy to help after reading their story.

"There's been an outpour of support, I've got dozens of messages from other videographer/photographers offering to donate their time to help film it. At the end of the day I hope this will be remembered fondly by the couple."

WOODSTOCK - A same sex couple from Woodstock was trending yesterday on social media after a story broke about a wedding videography company from Brantford, who refused them service, because of their sexual orientation.

Kelly Roberts and Mallory Arthur were excited for their upcoming nuptials and had reached out to Caramount Pictures in Brantford to document the big day. The couple was shocked when the owner Cara Hamstra sent them this response, explicitly saying they do not film gay weddings.

Since sharing this screen shot on social media, the story has gone viral and has been picked up by most National news outlets in the country. Kelly and Mallory posted the following message on Facebook after receiving all kinds of support.

"Thank you so much to everyone who has reached out to us in the last 24 hours. The outpouring of support from everyone has been overwhelming in the most beautiful way. It has been amazing to see the recommendations from so many LGBTQ+ and allies owned businesses. Thanks to your recommendations, we were able to find a videographer to film our big day. I wish we could invite each and every one of you to celebrate with us? We are hoping to compile a list/website/hub of LGBTQ+ owned and/or supportive businesses in the Woodstock and surrounding areas to help couples support businesses with views that align with their own."

Since the story has gone viral the company has had an outpouring of support from across the County. Olympic silver medallist at the 2018 Olympics Kirsten Moore Towers tweeted out her support.

Caramount Pictures is a company located in Brantford, Ontario. Please do not hire them for your photography 😊😊 pic.twitter.com/DJxhjeQqDk

The couple has also received offers from other photographers who would happy to document their big day and the outpouring of support has been tremendous.

Heart FM has tried to reach out to Caramount Pictures, however the company has taken down their Facebook page and their web site is listed as not active.

We are looking to do an interview with Kelly and Mallory today and will posting an update as soon as that happens.