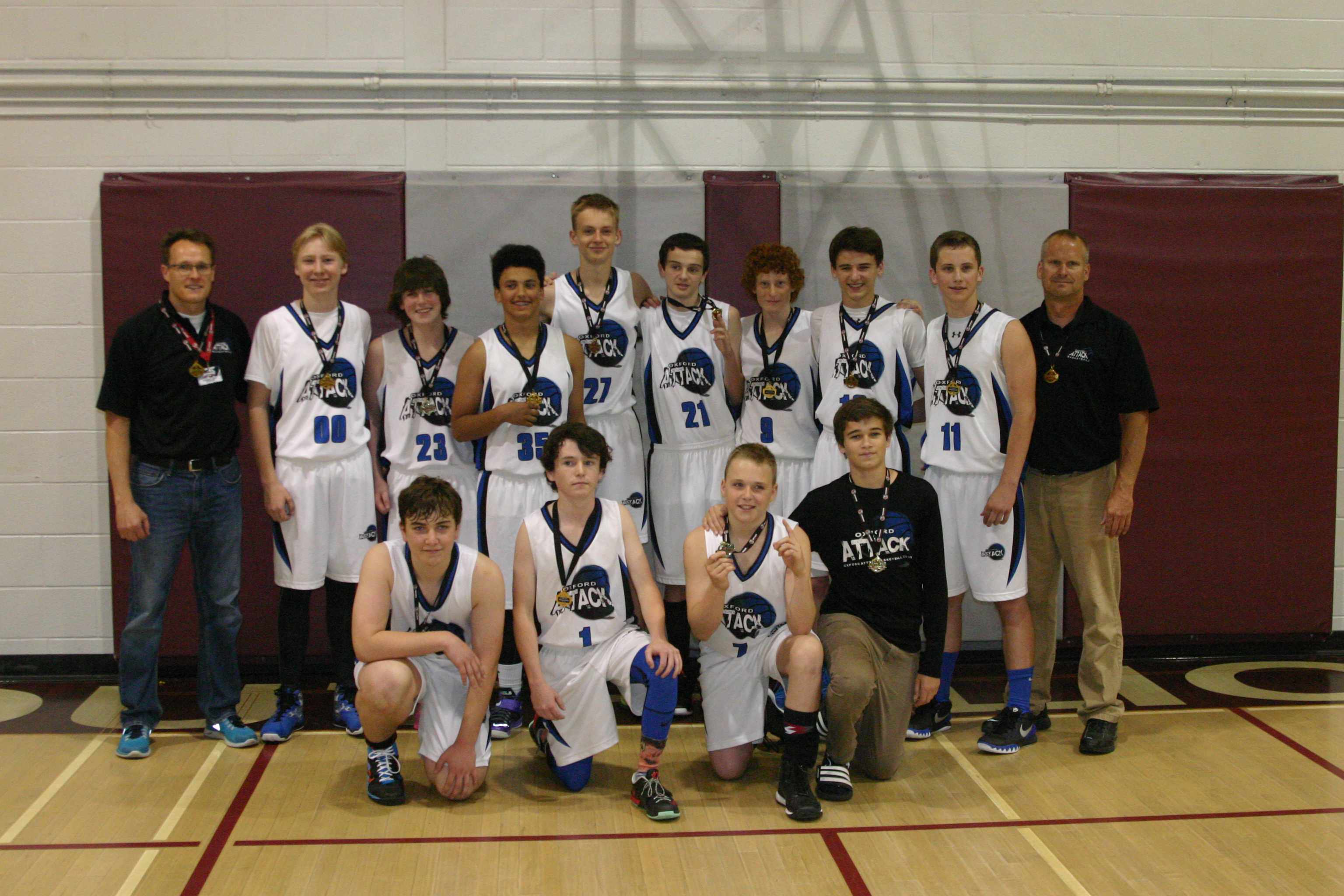 The Oxford Attack Under 15 Midget Boys won their second consecutive gold medal at the Ontario Basketball Association Championships in Division 8 (out of 12) in London over the weekend.  This Attack boy’s squad also won OBA gold competing as U14’s last season and had a silver place finish as U13’s.

The Attack boys opened pool play against their nemesis Orangeville Hawks.  The Hawks were 2-1 against the Attack this season and definitely had the psychological edge over the Attack team entering the game.  The Attack were prepared for Orangeville’s pressure defense and battled to a draw after the first quarter.  Turnovers in the second quarter, however, led to 10 point halftime lead for the Hawks that left the Attack feeling deflated.  In the second half the Attack battled back to tie and eventually take the lead with gritty, resilient play and finally solved the Hawk’s press.  This was one of the most important wins of the season for the Attack as it kept their OBA gold medal hopes alive and crushed the Hawk’s chances of playing in the gold medal game after pool play.

The Attack next faced the local Stratford Revolution squad who defeated the Attack earlier this season by a single point.  The Attack came out firing on all cylinders; combined with their stifling man to man defense, romped over the injured Revolution 67-36.

The Attack were assured of their place in the gold medal game as a 2-0 team but wanted to finish pool play undefeated as they faced the Kitchener Vipers.  Once again the Attack defense shut down their opponent as the Attack were in control the entire game cruising to a 60-46 victory.

The gold medal game was against a rugged Burlington Panthers team that employed a double teaming 2-3 zone.  The Attack’s precision passing around the zone and fast break flourished early in the game resulting in a comfortable 10 point halftime lead.  Early in the 3rd quarter the Attack lead swelled to 16 points but then the Panthers comeback began.  The Attack defenders tired in the 4th quarter and the Panthers hit some clutch 3 point shots and were solid from the foul line to narrow the Attack lead to a single point.  The Oxford Attack U15 boys rallied and hung onto to win their second consecutive gold medal at the provincial championships with a hard fought 49-46 victory.

The Attack U15’s finished their season with an impressive 22-8 record.