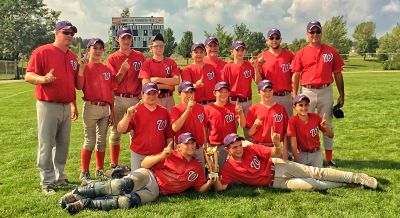 WOODSTOCK -- The Woodstock Wranglers Major Peewee baseball team did Woodstock proud on the Labour Day weekend by winning the Provincial Championships in St-Thomas.

The team was undefeated in 6 games throughout the weekend and outscored their opponents 73-35.  “The boys had a good understanding of the importance of league play but recognized that the ultimate goal was to win the Ontario title. We knew that this team had all the skills and potential to achieve this goal. This meant sacrificing certain things during league play in order to develop player skills. " said manager Mike Houle.

The team had a great start on Friday in games against Bolton and Waterdown behind a solid pitching performance from pitcher Matt Houle who started both games and very good pitching relief from Bailey Couch, Colton Ebel, Crawford Passy and Tyler Kean. In the Waterdown game, the team fell behind 12-6 only to roar back with great hitting, scoring 4 runs in the bottom of the 6 and another 3 runs in the bottom of the 7th for a walk-off win on a timely hit from Jordan Kelner.

On Saturday, they continued from where they left off taking an early 3-0 lead and holding Chatham off the score sheet behind 5 solid innings of pitching from David Ficht with relief from  Hayden Gear and Bailey Couch for a final score of 6-0. The Saturday night game was over in 5 innings where the Wranglers had 34 hits and outscored St-Thomas 19-8 behind strong hitting performances from Craig Kaufman, Jayden Purdy, Connor Stefan, Kyle Brezinski and David Ficht.

In the semi-finals on Sunday morning, Jordan Kelner kept Simcoe at bay limiting them to 6 hits over 4 innings. The bats were still alive allowing Woodstock to triumph 9-5.

The final game against St-Thomas was close for 3 innings with a score of 2-1 for St-Thomas. In the 4th inning the floodgates opened and the Wranglers scored 7 times to take a lead they did not relinquish. The final score was 15-3 on 25 hits.

“This team has been together for a few years and have played well at the last few Provincial Championships losing twice in the semi-finals. The coaching staff approach this year was to work hard during the year and prepare mentally for the Provincials.  New team additions including Passy, Purdy, Kaufman and Gear allowed us to expand our pitching staff and improved our hitting. The returning players worked on their weaknesses and all showed great improvement. The team showed great support of each other during the Inter County Championships 2 weeks ago where they were the talk of the tournament by defeating the first and second place teams” manager Houle said.

The coaching staff consisting of Keith Ficht, Sean Couch, Jeff Ebel, Joan Morris and Mike Houle, have instilled strong work ethics and keep reminding the boys of the team’s motto “Throw Hard…Hit Hard…Play Hard”. They certainly did on this weekend.