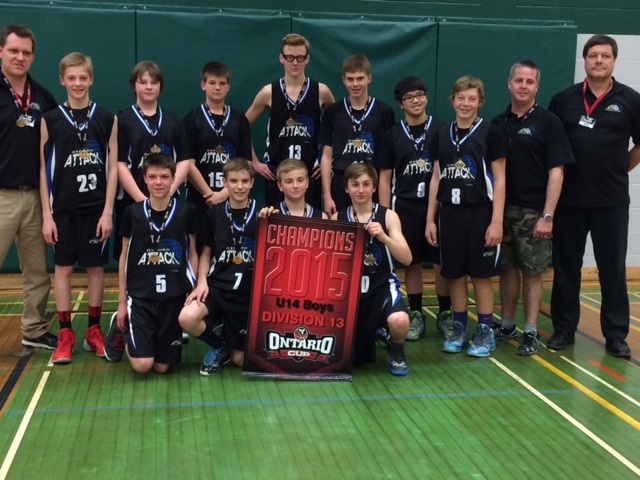 The Oxford Attack Major Bantam Boys ended their season beating four tough opponents on the way to their gold medal win in Division 13 at the provincial championships in Toronto last weekend.

The Oxford Attack Major Bantam Boys ended their season beating four tough opponents on the way to their gold medal win in Division 13 at the provincial championships in Toronto last weekend.

The weekend started with a game Friday night against the Orangeville Hawks.  A disciplined offense by the Attack worked well against the Orangeville team’s man on man defense and led to a 53-31 victory by the Attack.  Justin Chisolm led the Attack with 14 points, Ben Dubois scored 9 and Evan Roswell added 6.  Dylan Chung stepped up and scored 8 points and was a major part of their win with his aggressive drives and rebounding in the game.

Saturday morning saw the Attack play Guelph CYO. Guelph ran a zone defense similar to the Attack’s which caused the game to become a low scoring defensive battle.  A key three pointer from James Mckee at the end of the 1st half stretched the Attack lead to 11 at half.  The game ended with the Attack victorious 38-29.  Luke Leuszler led the Attack with clutch shooting from the elbow and ended the game with 10 points.  Justin Chisolm also netted 10 for the Attack with his dominant play under the net.

The Saturday afternoon game saw the Attack meeting Kanata.  A loss would have meant a three way tie for first with three teams at 2-1 and the Attack would not have advanced to the gold medal match due to point differential.  The Attack were able to take a lead of 23-16 into the third quarter but relentless pressure by Kanata eventually cut the lead to 5 with less than 3 minutes to play.  With a strong effort from the whole team the Attack were able to stretch their lead finishing the game with a 38-27 win.  Ben Dubois scored 17 points with ten coming in the last few minutes of the fourth quarter against the trap to lead all scorers.  Justin Chisolm continued his strong play under the basket with 8 points, Mackenzie Deutschlander added 5 and Tyler Rooke chipped in with 4.

The gold medal game saw the Attack meeting up with Collingwood.  Collingwood started the game running a 2-3 zone against the Attack.  The Attack handled the zone easily with patient ball movement and precision passing, and in spite of struggles shooting from outside, the Attack led at half 19-12.  Coming out of half time the Attack prepared for a switch in defense and was excited to see Collingwood switch to a man on man.  Well executed screen and rolls led to easy baskets which forced Collingwood back into a zone within a couple of minutes.  The Attack continued to expand their lead into the fourth when Collingwood switched to a very aggressive man on man defense to try to pressure the Attack’s point guards.  Aaron Canfield and Evan Roswell displayed great discipline and patience handling the pressure and capitalizing on every mistake.  In the end, the Attack were able to cruise to an easy 43-24 victory to capture the gold.  It was the best game of the year for the Attack and it came when they needed it most.

Justin Chisolm continued his outstanding play and in spite of being double teamed most of the game led the Attack with 17 points, Ben Dubois added 12, and Ethan Roberts and Jack Barrowcliffe each added to the tally.  Although not shown on the scoring sheet Aaron Canfield was outstanding handling the pressure in the fourth quarter and frustrating Collingwood’s attempt to force turnovers, and Evan Roswell’s relentless defense at the top of the zone led to numerous Collingwood turnovers.

The gold medal was a full team effort and the culmination of 7 months of hard work with the team playing to their full potential when it counted most.