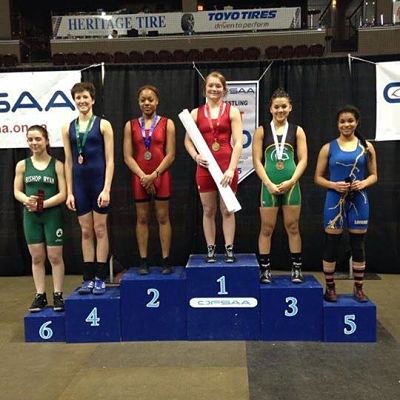 WOODSTOCK - On Wednesday, March 4th at OFSAA Wrestling in Windsor, Ontario, the lone wrestler from WCI avenged her championship loss from 2014.

Two years ago, Larissa Bufalino asked permission of WCI's athletic department and administration if she could represent the school at TVRA wrestling.  As WCI has long since had wrestling mats or a coach, Larissa trained with other local teams and coaches (including her own father, Carl Bufalino) to help prepare her over the past two seasons.  She also trains on her own at the University of Western Ontario.  Last year, she easily won TVRA and WOSSAA gold, qualifying for OFSAA where she was pinned in the championship match to earn an OFSAA silver medal.

This season Bufalino was determined to win OFSAA gold.  Through TVRA and WOSSAA she dominated the competition winning every match in the first round by pin or a points mercy (up 10 points at any time) achieving a gold medal at both competitions.  This year at OFSAA, she essentially repeated what she accomplished at TVRA and WOSSAA, only allowing 2 points to be scored on her the entire tournament.  She won the OFSAA gold in the 57.5 kg weight class by pinning her opponent a mere 73 seconds into the first round.

However, Larissa's season is not over as she is representing Team Ontario at a tournament in Syracuse next weekend.