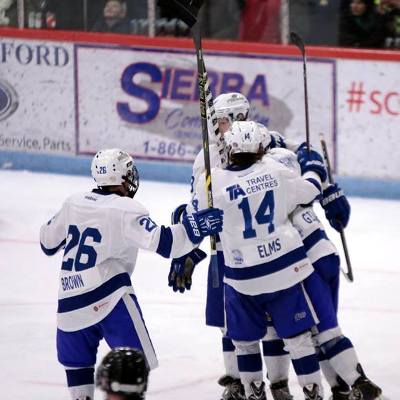 PARIS - The Woodstock Navy Vets are one game away from heading to the semi-finals.

The last time Woodstock won a playoff series was in 2009 when the team was known as the Renegades.

Woodstock were in Paris for game five Wednesday night.

Chris Nauts , Mackenzie Langford , and Austin Richardson got the Vets goals and Tyler Lyons added a powerplay goal in the last minute of the second period to give them a 4-0 lead going into the third period.

Jake Schneider and Mike Gillespie each added two assists for the Vets while Richardson also had an assist to go along with his goal for a two-point night.   Swindells faced 33 shots in the Vets net.

The Vets will look to wrap up the series Friday night in front of a home crowd at Southwood Arena.  Puck drops at 7:45 pm.

The Merchants were in Burford for game four of their series Wednesday night.

Norwich edged the Bulldogs 2-1 to tie the series at two games apiece.  The two will meet up for game five Friday night in Norwich.  Game six goes Saturday in Burford and if needed, heads back to Norwich Sunday for the final game.