5 Movies That Just Happen To Be At Christmas

You get it – the Grinch’s heart grew two sizes that day, Hermey wants to be a dentist, and every time a bell rings an angel gets its wings.

But if you have to watch your kid queue up Elf one more time, you might actually explode.

No heartfelt, sticky-sweet lessons in this movie - unless you count don’t get it wet and don’t feed it after midnight!

The whole thing kicks off because a man wants to find a Christmas present for his son. Little does he know giving the cute little mogwai to his son will end up so badly.

But c’mon – how cute is Gizmo in that hat?

It’s sweet, sad, and deliciously dark. Edward Scissorhands might not be the first movie you think of when decking the halls, but a huge part of the movie is looking at why it snows. Okay, so the whole movie isn't around the holidays, but it plays a part.

Grab a warm mug of hot chocolate, snuggle up on the couch, and hold your significant other close as you watch the story unfold.

Tim Burton makes a second appearance on this list with Batman Returns. There’s no denying this is a Christmas movie – there’s the lighting of the Gotham Christmas Tree (I don’t recommend decorating with bats BTW), Christopher Walken handing out presents, and more mistletoe than you can throw a Batarang at.

Moving from DC to Marvel, Tony Stark gets into some holiday hijinks of his own. He gives Pepper a truly terrible giant rabbit as a Christmas gift, and there’s even a ‘Ghost of Christmas Past’ element in Aldritch Killian.

Not to mention the final battle is backlit by twinkling Christmas lights. Doesn’t that give you the warm-and-fuzzies?

This is definitely not your typical feel good Christmas movie – in fact its easier to forget that it is actually set at Christmas time with all the non stop cops-and-robbers mayhem and violence. Definitely not one to share with the kids.

Writer/Director Shane Black has already appeared on this list for Iron Man 3, and those aren’t his only Christmasy Non-Christmas movies – The Last Boy Scout, The Long Kiss Goodnight, and Kiss Kiss Bang Bang all happen with a yuletide backdrop. In fact Black claims that Lethal Weapon’s Christmas setting helped to inspire Die Hard. 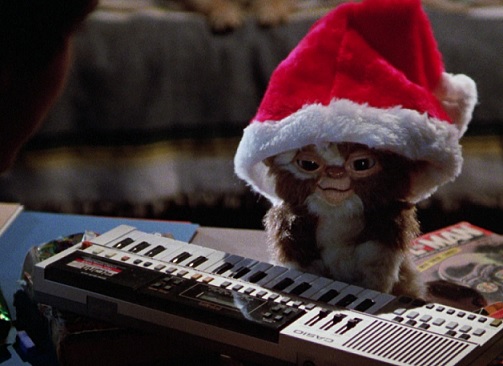