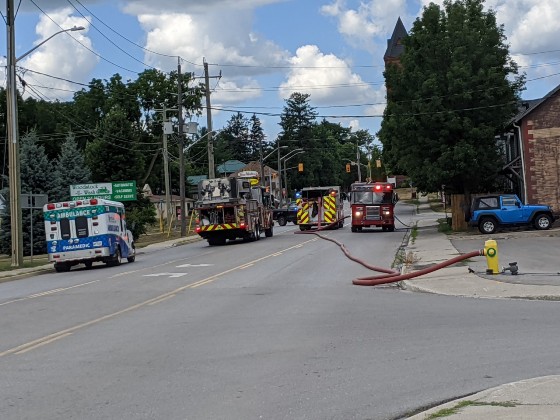 Nobody was injured after a fire today in the area of Main and Simcoe Street in Woodstock. It was the second fire in 2 days in the Friendly City that was caused by discarded cigarette butts.

WOODSTOCK - Nobody was injured after a residential fire on Mill Street between Main and Simcoe today in the City of Woodstock.

The road was closed for almost an hour while crews extinguished the blaze. Public Information Coordinator Lisa Woods says the fire was caused by a discarded cigarette butt that was left on the deck after a night shift.

This is the second fire in 2 days in the City of Woodstock that was caused by a cigarette butt. Yesterday a grass fire started on Parkinson Ave after someone tossed a butt out of their car window.

Woods says you have to be really careful with cigarette butts, especially with this heat.

Woods says you need to extinguish your butts in a container if you are going to smoke in the car and never toss them out the window. You can follow the Woodstock Fire Department on Facebook and Twitter for more fire prevention tips.

2 days 2 fires started by cigarettes-1 out a car window started grass on fire-1 on a deck that could have been much worse #FireSafety pic.twitter.com/zhZyoVkbCO