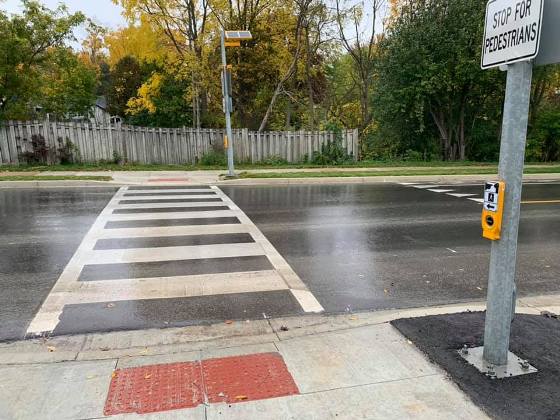 photo courtesy of Marcus Ryan of the crosswalk at Bell & McKeand in Ingersoll.

Oxford County Public Works will be installing the full crosswalk at the intersection of George and Dundas in Thamesford.

THAMESFORD - A new crosswalk is coming to Thamesford.

Oxford County Public Works will be installing the full crosswalk at the intersection of George and Dundas.

"These busy roads like Dundas or County Road 6, any of the large roads in Oxford County that move goods and people, also go through communities and the people in those communities still have to be able to move around and that means shoppers, that means kids, parents etc. Without that ability to move around safely, that does inhibit economic growth, people are not going to cross the street to go to those businesses if it is too hard, this is about a whole community plan, not an individual issue, all of these issues need to be addressed to have a whole community livable and satisfying to residents."

Ryan adds the crosswalk is a result of a policy, and the work of myself, Councillor Davies, and Oxford County Public Works Staff to understand the pedestrian and vehicle traffic situation.

Ryan says this is going to be a full crosswalk.

"It will have the bumps on the curb so that someone who is visually impaired can feel that when they walk up to it. It will have the ticking sounds in the button so people who are visually impaired can find that button and push it and it will change sounds when you cross so you will know it is safe to cross. It will also have flashing orange lights when the button is pushed so the traffic coming through will see a visual change that someone has pushed the button."

Ryan isn't sure when construction will start but he does have a commitment from Oxford County Public works that it will be completed by the end of the year.