Oxford Junior Farmers Donates $2,400.00 To The Alzheimer’s Society of Oxford 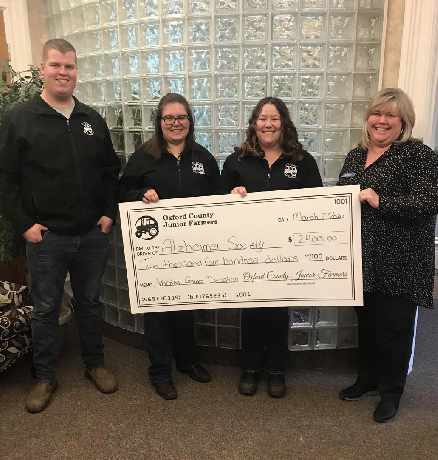 The group consists of 39 members, ranging from 15 to 29 years old, and it has been a non-for-profit organization within the County for 106 years.

President of the Oxford Junior Farmers Karen De Bruyn says the organization does great work for those living with dementia.

“The Alzheimer Society does great work advocating for and assisting people with dementia in our region. This makes the organization a worthy cause for us to assist, but it is even more meaningful since we have members of the club who have loved ones that experience dementia and have used the great services that the Alzheimer Society provides.”

The money was raised through a Junior Farmers fundraising dance in Tavistock on February 8th, which was held as a part of the Provincial Winter Games.

Executive Director of the Alzheimer Society of Oxford Shelley Green says she is pleased with the group’s contribution.

“We are absolutely thrilled, inspired by and appreciative of the hard work of the youth members of this organization. Youth caring for people affected by dementia is so heartwarming and something I think all residents of Oxford County can be proud of.”

The Alzheimer’s Society of Oxford was chosen by the Provincial Junior Farmers Association as their charity for 2019, all clubs aligning.

The Oxford Junior Farmers raises money each year through the Embro Truck and Tractor Pull and other fundraisers, which they give to a variety of local groups and organizations.