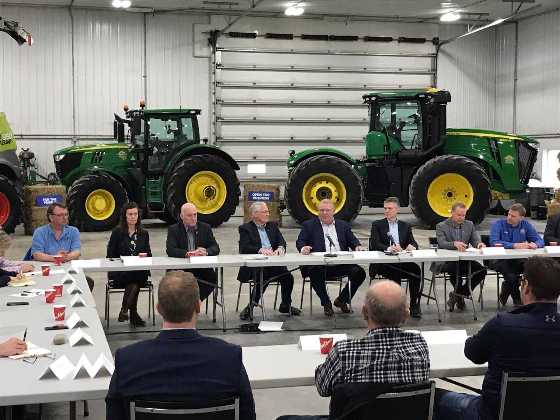 Premier Doug Ford was in Oxford County today to talk with local farmers about the impacts of a Carbon Tax. He also spoke to the media and answered questions on the proposed landfill.

OXFORD CENTRE - Premier Doug Ford was in Oxford County this morning along with Local MPP and Minister of Agriculture Ernie Hardeman and the Minister of the Environment, Conservation and Parks Rod Phillips to discuss the federal carbon tax during a round table conversation with farmers at Veldale Farms in Oxford Centre.

Ford says the carbon Tax that will start on April 1st is going to hurt rural residents more than anyone.

"Make no mistake about it, this is a tax, they put the word Carbon in front of it, but it does absolutely nothing for the environment, all it does it hurt families. You bring your kids from point A, to point B, it's going to cost more, everything at the grocery store is going to cost more and we sat down with the Prime Minister and asked him that, a very simple question, why? We are already at 22 percent at emissions reduction when we have to hit 30 percent and we still have 11 years to do it, we don't need a carbon tax to reduce emissions."

"We are competing against people around the world, we are competing with our great neighbour south of the border, Ontario alone does $350 billion dollars a year in two way trade with our American friends, if we were a stand alone country, we would the third largest trading partner with the States, Ontario alone, but how can we compete when we have one arm tied behind our back, when Ohio, Pennsylvania and other jurisdictions in the States, they don't have this burden of a Carbon Tax and don't listen to this malarkey of your getting a rebate, the people who are going to get hurt the most are the rural folks."

Ford says the Province of Ontario is prepared to take the Federal Government to court over this carbon tax and they will be joined by other provinces.

The topic of the proposed Landfill near Ingersoll also came up at the meeting. Minister Phillips said they would discuss the specific details of the Walker Environment because the assessment is under way.

"Your talking about a particular landfill which has an assessment underway so I will not talk about it specifically but I will talk about is the work that Ernie Hardeman did in terms of bringing forward the issue that municipalities have their say in terms of placement of landfill sites. In the environment plan that we laid out in November that has been laid out as one of our commitments and that is a commitment our Premier feels very strongly about. I should as well Ingersoll Mayor Ted Comiskey played an important role in bring that issue forward."

Ford meanwhile insisted that he thinks municipalities should absolutely have a say in where landfills are located.

"Who are a bunch of politicians in Queens Park to tell municipalities how to run their municipality, it is up to them, they have an option, to opt in, or opt out, that is up to them, it is not necessarily up to us to overrule a municipality that is the last thing I would want to do. I don't care if someone says they have 300 or 400 jobs, we are not going to stick something in an area that people don't want."

After the media scrum, the Premier spent the afternoon talking with local farmers during a round table discussion about the Carbon Tax and how it is going to affect their every day lives.