The Province And ETFO Reach A Tentative Agreement 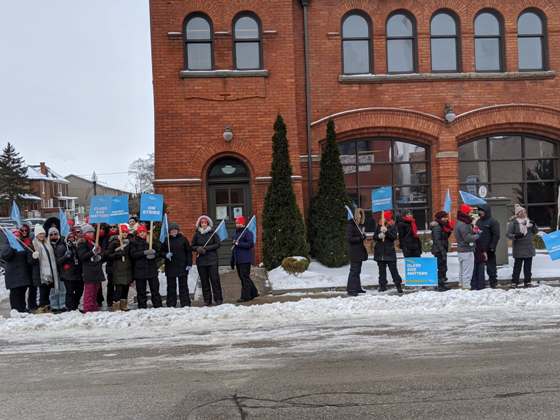 The provincial government and the Elementary Teachers' Federation of Ontario (ETFO) reached a tentative agreement, plus separate tentative agreements have been negotiated for teacher, occasional teacher and education worker members.

ONTARIO - The provincial government has reached a tentative central agreement with the Elementary Teachers' Federation of Ontario (ETFO), the Ontario Public School Boards' Association (OPSBA) and the Council of Trustees' Associations (CTA).

An agreement was reached last night and separate tentative agreements have been negotiated for teacher, occasional teacher and education worker members.

ETFO President Sam Hammond says they're grateful for everyone's support during this time.

"This has been a very prolonged and difficult bargaining process. We are very grateful for the support and unwavering solidarity of our members, and the public who have continued to stand up for public education and the supports that our students and educators need now and in the future."

"Our Government is pleased to announce a tentative agreement has been reached between the Crown, ETFO teachers and education workers, and the school boards trustees' associations. This tentative ETFO agreement builds further momentum for deals and progress that students deserve, following last week's tentative agreement signed with the Ontario English Catholic Teachers' Association (OECTA). We remain focused on landing further deals, to provide stability and certainty to students, parents, and educators."

The ETFO will review details of its tentative central agreements, along with the ratification vote process with local leaders and members next week.

This is the second tentative deal to be reached between the Province and a teachers' union, as the first tentative agreement was made last week with the Ontario English Catholic Teachers Association. The ETFO is the largest teachers' union in Ontario.

At this time, the Ontario Secondary School Teachers’ Federation (OSSTF) and the Association des enseignantes et des enseignants franco-ontariens (AEFO) are without deals.

Strike action will be suspended immediately by the ETFO, which represents 83,000 members, pending results on the central ratification votes.