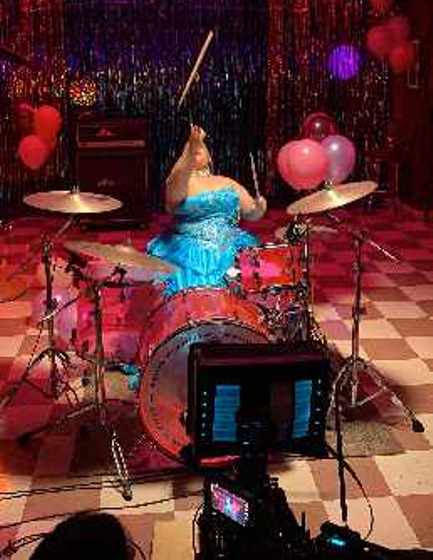 Local drummer Sharon Ransom received an opportunity of a lifetime after she was in a Facebook commercial that was launched on International Women's Day. The videos have had over 20 million views in total.

WOODSTOCK - Local drummer Sharon Ransom received an opportunity of a lifetime after she was in a Facebook commercial that was launched on International Women's Day.

The audition was on a Facebook group called Drummergirls United.

Ransom says she thought it was a scam at first.

"How it happened was I actually sent my video in of me playing the drums and doing my drum solo for my wedding, so I was in a dress then. So they absolutely loved that, that they decided to base this commercial around me being in a blue dress, I guess."

The commercial was to advertise to different women's groups on Facebook that women can be a part of.

She says the group she auditioned through is ran by her friend and it is for female drummers to post their videos and show support for one another, along with offering ideas and drumming advice.

She says she was greeted by a chauffeur once she got to Los Angeles.

"They had my name and everything on a board, waiting for me at the airport and drove me in a fancy car from the airport to my own hotel room. And I was just blown away from the whole experience and because I couldn't believe what was happening."

Ransom is in two videos and they have amassed over 20 million views in total. She says they range between 45 seconds and one minute, and she says it took one day to shoot the whole commercial.

She spent three days with Facebook producers to make sure the video was just right and she also met other drummers.

Since it was released, she says her life has completely changed.

"I've had a ton of drumming companies contact me to be sponsored by them, I've had digital marketing crews ask to work with me. I've been asked to do photo shoots in the United States and travel to different areas to do that. I've also been gaining students, too. I absolutely love teaching lessons and that's my main thing so that has been an absolute dream of mine. Everything has been insane."

She has also shared her experience on the Ransom Drum Lab Facebook page.

She received over 1,000 friend requests online in two days and there are people from as far as Hawaii who want lessons from her.

Ransom is also the owner of Ransom Drum Lab where she offers drumming lessons to kids of all ages. She also plays shows and is a part of the music program at her local church.

She says she is in the process of working on a website to do online lessons, but for now she is offering the lessons through Skype. She says she still has some spots available for lessons, and for those who are interested they can email her at ransomdrumlab@gmail.com.

You watch the full video below.

This International Women’s Day the Drummergirls United Facebook Group is paying tribute to all women coming together to make some noise. #InternationalWomensDay #IWD #WomensHistoryMonth #WeMakeHistoryTogether #MoreTogether