Woodstock native Nick Utting turns 25 on April 4th. Nick was born with KCNT1 a rare form of epilepsy, all though it took 19 years for him to get a diagnosis. Read the Utting's Journey with Nick Below. Then take a moment and follow the links so you can learn more about KCNT1 and make a donation if you are able. 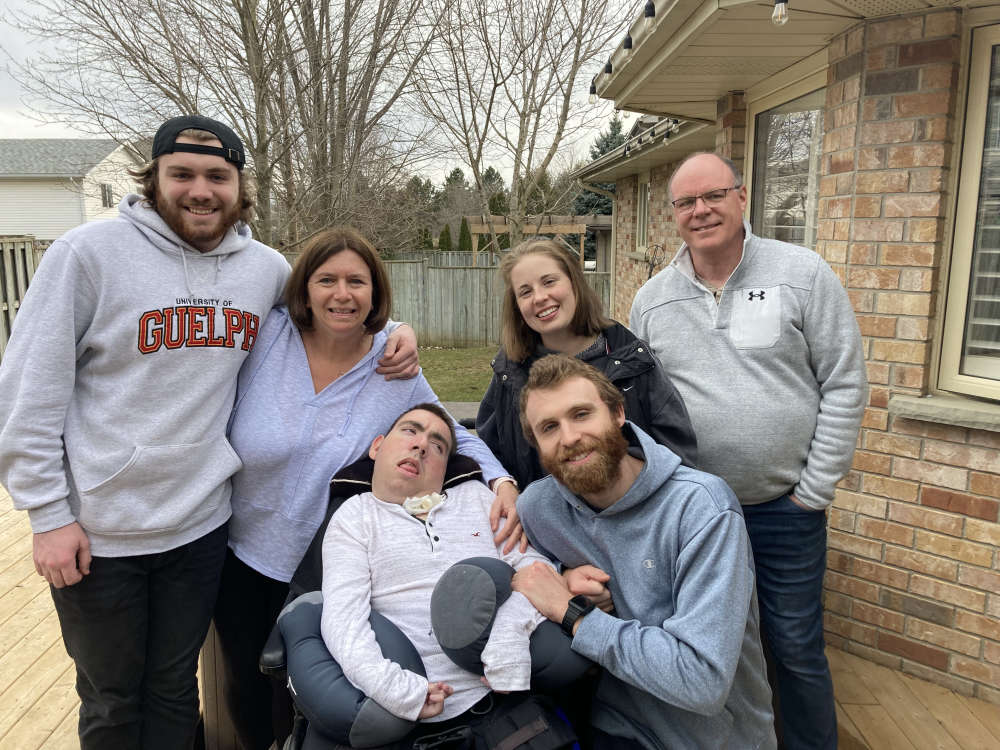 Our Journey with Nick

It all began when I gave birth to our second son, a 10lb 4.5 ounce strapping baby boy on April 4, 1997. Everything seemed wonderful until Nick was 7 weeks old. That fretful morning will be etched in our minds forever. We couldn’t wake Nick up that morning....he was breathing but wouldn’t wake. We rushed him to CHWO where an army of professionals began to tend to him. Much to our surprise what we thought were little eye movements were diagnosed as seizures. Over the next two months Nick would endure test after test, bloodwork and multiple different drug trials. Nothing would control his seizures and there was no definite cause. Everything had been ruled out.

As time went on it was evident that Nick was not meeting his milestones. He had repeated admissions to hospital for aspiration pneumonia and eventually lost his ability to swallow safely. It became clear to John and I that we were on a unfamiliar journey and that it would be life changing.

John and I decided to grasp this new normal and run with it. We wanted our little family to enjoy life to its fullest. There were days when Nick would have upwards of 30 seizures and we would cope as best we could. We made the best of the good days for sure.

Over the years Nick and his two brothers Mitch and Ethan have done a lot. As a family we would always go camping in the summer and to this day it is one of Nick’s favourite things to do!! We have travelled and never let Nick’s disability stand in our way. Nick has taught so many people, including ourselves, so many life lessons. He is one of the happiest boys I know. Nothing seems to phase him. He has taught us that being with family and enjoying time together is so vitally important. He has shown us sheer joy with every little accomplishment he has tackled....a simple smile, being able to track us with his eyes and respond with those gorgeous blue eyes of his. It’s about the little things.

Nick has volunteered along with John and I at countless events over the years. We try to keep him very involved in his community. He is very charming with anyone he meets. Nick was very involved with Easter Seals and was even the poster boy for their Ontario campaign! Nick attended

school continuously since age 5 but unfortunately that all came to an end when Nick turned 21. Up until the pandemic hit Nick attended a day program with one of his nurses twice a week where they enjoyed making music with instruments, had crafts and went bowling.

After 19 years, in June 2016, John and I were finally given a diagnosis for Nick. Thanks to in depth gene mapping it was determined that Nick has a very rare gene defect with less than 100 cases identified thus far worldwide. His KCNT1 gene responsible for proper function of potassium channels in the brain has a transcription error. Nick’s potassium channels are constantly open causing his brain to be in a constant excitatory state causing his uncontrolled seizures(he continues to have 8-10/day).

On the bright side it is not hereditary(it is a new gene defect)and there is a targeted treatment with an old medicine called quinidine. Unfortunately this medication was not available in Canada so we met with an amazing doctor in Rochester, Dr. Bearden, who prescribed it for Nick. Nick was admitted to hospital about a month after receiving this medication but unfortunately for Nick he had to stop it just after the test dose as it caused QT prolongation which is very dangerous.

The silver lining to our meeting with Dr. Bearden is that he put us in touch with a couple of his colleagues(Dr. Helbig and Dr. Fitzgerald) at the Children’s Hospital of Philadelphia and we took Nick to see them in February 2018. They made some recommendations for treatment for Nick and we also enrolled in a couple of studies for KCNT1 kids.

We went on to try the ketogenic diet for Nick in the summer of 2020(he had tried this when he was two but it made him very sick and we had to withdraw the treatment). In trying this again Nick was on it for just over one year and unfortunately it was not successful in decreasing his seizures and caused some difficulty with his bowels so we again stopped this.

In the summer of 2021 Nick started CBD oil(with a small amount of THC)and this has had the best effect on decreasing his seizures. He remains on this today. The only sad part of him being on the CBD is we can not take Nick across the US border as it is not legal in the US. This will preclude us from travelling to the US for the foreseeable future at least with Nick.

Nick has had some amazing nurses over the years and very unusually has had one of his nurses since he was 5 months old!! These nurses become

a part of the family. None of them can resist his blue eyes and adorable dimples!! KCNT1 kids deserve all the wonderful experiences that life has to offer and hopefully with the foundation research can be ongoing and this will allow kids like Nick to have a truly full life. Hope is definitely on the horizon for these kids and those that come after.