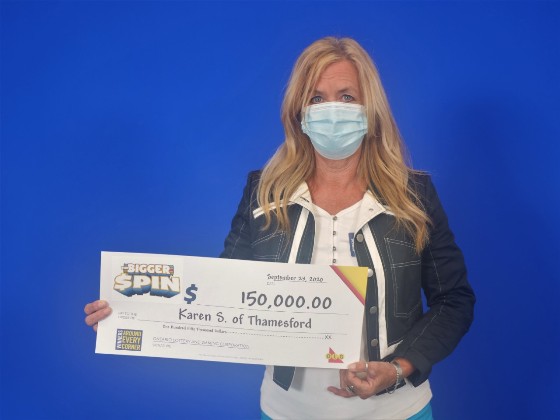 A 61 year old grandmother from Thamesford has won $150,000 by playing the Bigger Spin Instant game from OLG.

THAMESFORD - A 61 year old grandmother from Thamesford has won $150,000 by playing the Bigger Spin Instant game from OLG.

Karen Sparling says she started playing the game when she saw that a friend was doing it.

“It sounded like fun so I thought I would try it.”

Sparling recently went to the OLG Prize Centre in Toronto to pick up her cheque. She discovered her win on the way back from the beach one afternoon.

“We stopped and picked up tickets and I uncovered a SPIN prize. When it landed on $150,000, I was dumbfounded!”

Karen said when she called her son to share the news, he thought she was pranking him.

The retired postal worker plans to share her winnings with her sister and children.

“I definitely need to celebrate this with my friend who introduced me to the game. It doesn't feel real. It’s hard to believe that this is happening.”

OLG is now accepting in-person prize claims by-appointment only for customers with prizes of $1,000 or more who wish to claim at the OLG Prize Centre.