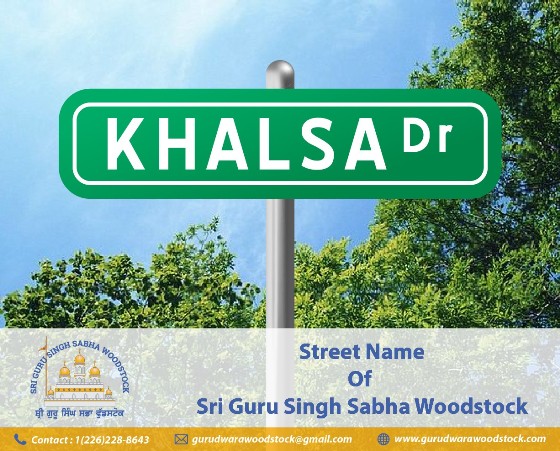 The working committee of Sri Guru Singh Sabbah Woodstock, which the new Sikh temple on Oxford 17 wanted to give a big thanks to Woodstock City Council for a new street name.

WOODSTOCK - The working committee of Sri Guru Singh Sabbah Woodstock, which the place of worship being built on Oxford 17 wanted to give a big thanks to Woodstock City Council.

They have sent a letter to thank the Mayor and council and congratulate the Woodstock Punjabi community for naming the street of Sikh Gurudwara to Khalsa Drive. This name holds great importance to the Sikh Community of Woodstock.

The word Khalsa refers to the devout members of the Sikh religion. This name is close to the hearts of the Sikh community as it is connected with the formalization of Sikhism. The "KHALSA" word was established in 1699 by the last living Guru of Sikhism, Guru Gobind Singh Ji. Its formation was a key event in the history of Sikhism. The founding of the Khalsa is celebrated yearly by those of the Sikh faith on a festival called Vaisakhi in April which is also Sikh Heritage Month.

You can read the letter from the working committee below:

Working Committee of Sri Guru Singh Sabha Woodstock would like to congratulate the Woodstock Punjabi Community.

With the efforts of Kingsmen Group and the members of Working Committee, the street name where the Gurudwara Sri Guru Singh Sabha Woodstock will be situated is named as "KHALSA DRIVE." This has been approved by the Woodstock City Council.

We would like to thank Mayor of City of Woodstock Mr. Trevor Birtch and Woodstock City Council for putting their collective efforts in approving the street name "KHALSA DRIVE". This is another step towards promoting multiculturalism in the City of Woodstock.