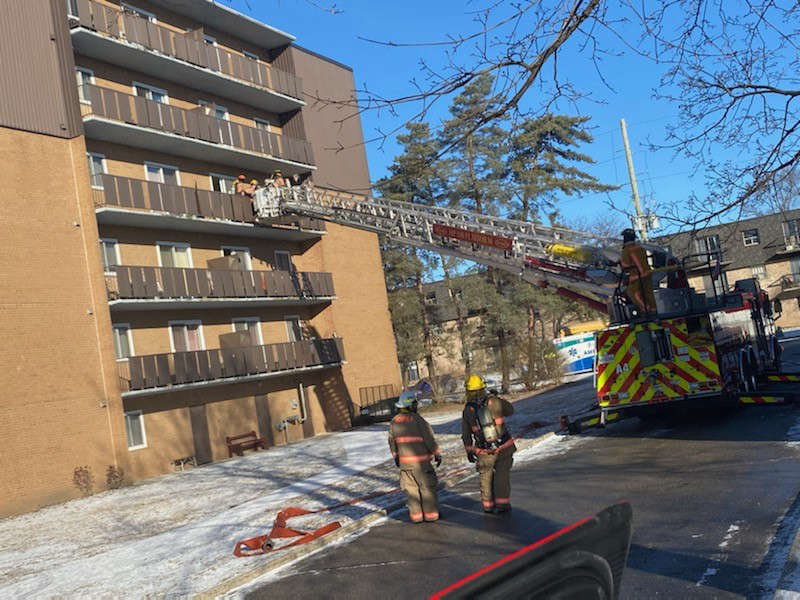 "When crews arrived, residents were sheltering on balconies with smoke and flames visible. Firefighters had to rescue about 18 residents from their units via ladder."

TILLSONBURG - Nobody was seriously injured after an apartment building was fully engulfed in flames in Tillsonburg this morning at 195 Lisgar Avenue.

Tillsonburg Fire and Rescue services first arrived at the building around 7:00 am. When crews arrived, an apartment on the fourth floor was already fully engulfed in flames. Firefighters from Norfolk, Southwest Oxford and Mount Elgin were called into help.

Fire Chief Shane Caskanette says it was a scary scene this morning.

"When crews arrived, residents were sheltering on balconies with smoke and flames visible. Firefighters had to rescue about 18 residents from their units via ladder."

The Tillsonburg Community Centre was activated as a reception centre for the tenants. Transportation was provided by T:GO and local taxi companies. Manager/Deputy Chief of Oxford County Paramedic Services Ryan says two people were taken to the hospital as a precaution.

"Two residents were transported to Tillsonburg District Memorial Hospital for smoke inhalation and several others were assessed on scene. There were no serious injuries and all residents have been accounted for."

Caskanette says the cause of the fire is still under investigation.

"There is significant water damage to units on the lower floors, and smoke damage throughout the building. We have conducted a preliminary walk through and will be allowing some residents into the building to retrieve medication, eye glasses and other essentials, but residents will likely be out of their units for the next several weeks."

Most of the tenants are staying with family and friends as the building is not habitable right now. The Salvation Army, Red Cross and Oxford County Human Services are also willing to help anyone who does not have a place to stay.

"Apartment fires are always challenging given the number of people involved, but everyone pulled together today in an efficient and effective response. Town staff did a great job running the reception centre, and the communication between community agencies was outstanding."

Tillsonburg Fire Chief Shane Caskanette was able to call into the station to provide the latest updates. Residents are being allowed inside the building later today to grab some personal belongings, as they will not be able to live at the apartment complex for some time. You can listen to the complete interview with Fire Chief Caskanette below.