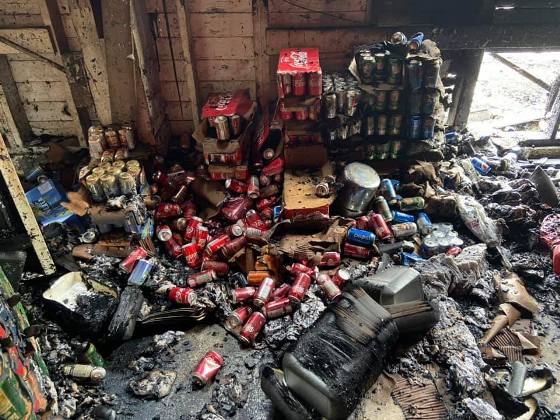 Todd's Dogs brand new trailer for events and all of his supplies were being stored at the fairgrounds which went up in flames last week.

WOODSTOCK - 2020 has been a tough year for everyone and Todd's Dogs is just one business feeling the brunt of it.

Normally you would see the popular food truck all over town at various events throughout the summer. Obviously that has not been the case and Todd has had to set up shop at the Home Hardware parking lot. Then last week, when the massive fire destroyed the horse barn at the Fairgrounds, Todd's brand new trailer and all of his supplies were located next door.

Owner of Todd's Dogs, Todd Elerby says he still isn't fully sure of all the damage.

"My equipment has been stored in the Cattle barn, which is next door to the horse barn and it sustained significant amount of damage to that building as well. I don't what the extent of the damage is, it is significant, no one is allowed in the building until Thursday, so I will know then what happened to all my stuff but I don't suspect it will be good news."

Ellerby is still operating at the Home Hardware parking lot and his regular truck was not impacted by the fire.

"I would like to be at Home Hardware as much as possible but I am dealing with the insurance company and suppliers trying to get more inventory in and with COVID, it's up and down as to when you can get product at any time, but I am getting out there as much as I can."

The trailer was booked for quite a few events and Ellerby has had to cancel all of them. He actually just bought the trailer a few months ago and branded it only a month ago. It was only used at two events before being destroyed by this fire. Ellerby was blown away by the support from the community.

"On Saturday, it was truly overwhelming the support I received from town, the thing that really set me off was two little girls who showed up, they are regulars, they come all the time with their parents. They are probably just the most well behaved girls in the world, they were wearing their Todd's Dog's t-shirts and they wanted to talk to me. The girls handed me a bag, with what I'm assuming was their allowance, as a donation to help offset some of the repair costs from the damages."

Ellerby says he still doesn't know what kind of help he will get from insurance. He has rejected the notion of GoFundMe's at this time, as he is hopeful the insurance company will do the right thing.

"I am typically the type of person who raises money for people and not the other way around and that is what I want to get back into doing."

A bottle drive has been set up by some of Todd's friends, Adam Tabor, Jeff Workman and David Ellerby. From now until September 22 they will be collecting bottles, all donations going to Todd to help him through this difficult time to rebuild what was lost. Please text Adam 519-535-8776 to arrange pick up or drop off of your empties.

“Burnt Orange” I’ve struggled with the thought of posting these pictures, because it’s not really something I want to...