Celebrating The History Of The Ingersoll Pipe Band 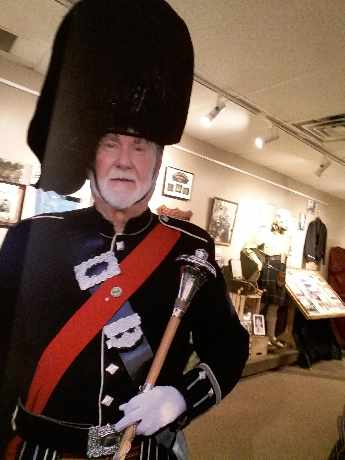 Piper's Salute is the latest exhibit at the Ingersoll Museum and it goes until June 1st.

The band is celebrating its 110th anniversary and the Piper's Salute looks at its history, which includes artifacts from the Museum and private collections.

Curator Scott Gillies says the band is the ambassador of Ingersoll.

"We're able to assemble this exhibit that looks at their early history from when a group of pipers came over from Scotland in about 1909 and found work at the local Noxon foundry that was making farm implements in Ingersoll and they were encouraged to proceed a little further and look at forming a band."

Gillies says they were sponsored originally by the Noxon company and their pipe major was Tom Johnston, who came also over from Scotland.

He says there is a variety of items and history on display.

"We have photographs and blueprints showing the construction of the Royal Party, so the band got to perform for them. one of the members was also a bugler from the first World War so he was front and centre when they got off the train. So we have things like that; we have Jack Little's antique sporran and belt buckles, his dirk on display. We have a drum skin from one of the bass drums."

The display also takes a look at their early days from World War I and World War II.

Gillies adds there have been over 200 members that have been a part of the Ingersoll Pipe Band throughout the 20th century.

The exhibit will continue until June 1st. For additional information, you can call the Museum at 519-485-5510.