Tractor Driver Charged After a Collision With a Train 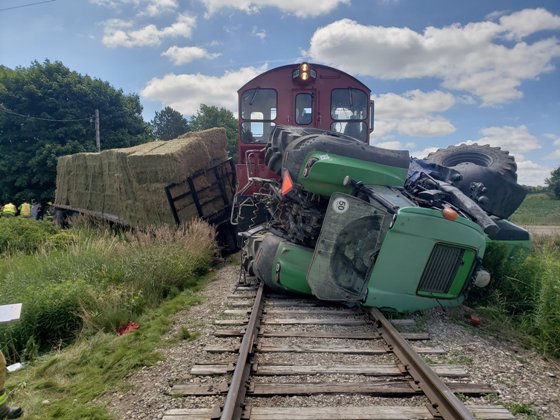 OPP have charged the driver of a tractor after a collision with a train on Daniel Road in South-West Oxford on Tuesday.

SWOX - OPP have charged the driver of a tractor after a collision with a train on Daniel Road in South-West Oxford on Tuesday.

Police say the slow moving farm tractor, hauling a flatbed loaded with hay, was heading westbound when it collided with a slow moving northbound Ontario Southland Railway train at the crossing.

The operator of the farm tractor was taken to hospital for treatment of non-life threatening injuries.

Daniel Road between Plank Line and Dereham Line was closed for approximately six hours to allow for removal of the damaged vehicles.

The 62 year old driver of the tractor from London was charged with Disobey Railway Crossing Sign - Fail to Stop.

The OPP are reminding motorists to obey all railway warning devices, including signs, lights, bells and gates. Before proceeding through a crossing, look both ways and listen for approaching trains. If a train is coming, or railway warning signals are activated, stop behind any gates or stop lines, or no less than five metres away from the railway track, and wait for the train to pass.