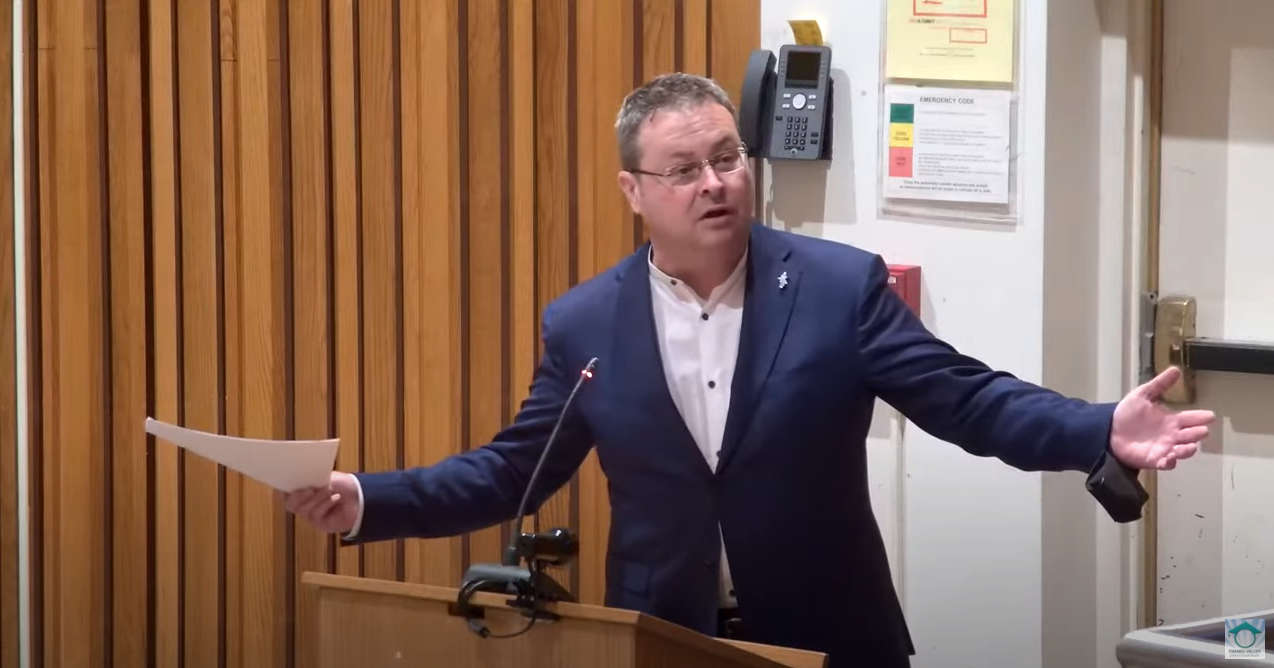 Mayor Marcus Ryan received a red card at the Thames Valley District School Board Meeting Tuesday night. His delegation was all about governance and who is really in charge of the school board.

TVDSB/ZORRA TOWNSHIP - Sparks flew at the most recent Thames Valley District School Board meeting, once Zorra Mayor Marcus Ryan took to the podium to address trustees.

He says his delegation was supposed to focus on governance and who is really in charge of the school board.

Ryan's delegation was interrupted less than a minute after he began. Board Chair Lori-Ann Pizzolato asked Ryan to be respectful to the assembly. This sparked a debate within the chamber about how Ryan was being disrespectful until London trustee Sherri Moore stated that Ryan's delegation started out with a lot of criticism and sarcasm. Pizzolato then asked Ryan to deliver his public input in a "broader context."

He responded by saying over the past 10 years as a Mayor, a Township Councillor, and a participant in school board meetings, he has never seen a head of council or members of council refuse constructive criticism of residents and taxpayers. Adding that whether the criticism is sarcastic or not is irrelevant.

Ryan was able to resume his delegation about four minutes later and he was red-carded a little over a minute later. He says it has been eight years since he has seen this happen.

"The only time that I have ever seen it happen before - this is going to sound like a set-up but it is not - is when we were trying to save AJ Baker Public School Mayor Margaret Lupton made a delegation to the school board and they showed a red card to her as well."

The Thames Valley District School Board issues the red card whenever the delegation exceeds the time limit.

As the Mayor of Zorra Township, Ryan says he does not have a red card and he has never shut down a delegation. Whenever a delegate exceeds their time limit, he will give them an extra minute or so to conclude their presentation.

Ryan says he has received overwhelming support ever since the meeting. He has received several messages, and phone calls and his Twitter following almost doubled within 24-hours. Ryan says everyone has been very supportive of him.

"Not a single person has said that isn't right. Every single one of them, including a lot of teachers, custodians, and school board employees have contacted me to thank me and it's really the governance that they're talking about. Who is in charge and who is running this thing?"

Ryan says a public education will be taking place at the Dorchester Arena on Wednesday, May 4th at 7:00 p.m. He says Thames Valley parents will be able to have their concerns heard and they will discuss their next steps.

You can watch Mayor Marcus Ryan's delegation to the Thames Valley District School Board in the video below. He begins his delegation at 35:38 and the red card is issued at 41:56.