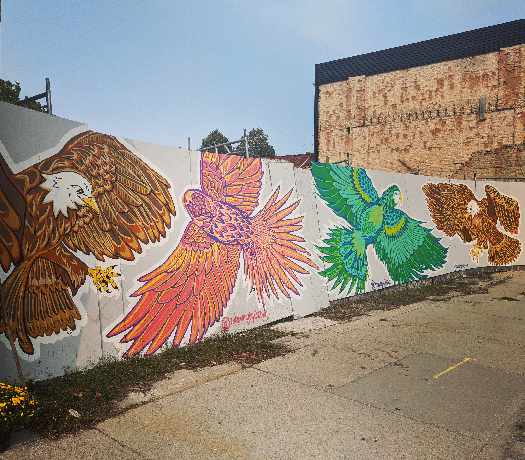 Artist Corryn Bamber met with a group of artists and representatives from the BIA and the City of Woodstock on how to come up with a way to beautify the city. The mural is located on Dundas Street at the intersection of Light Street.

WOODSTOCK - A beautiful mural has been painted in downtown Woodstock.

Artist Corryn Bamber explains how the mural came to be.

"A group of artists that were gathered with representatives from the BIA and the City that just kind of had a meeting to see what we could do and come up to beautify the City with some murals and to make it so that some of the places that could use a touch up got a touch up."

Bamber painted the first mural, free of charge, the BIA provided the funds to pay for the supplies. They are looking for sponsors to come forward to pay the artists so that more of these can be erected in the city.

Bamber explains the mural she created on Dundas Street at the intersection of Light Street in between Habitual Chocolate and Delights Bakery.

"I painted four large birds in my own style, two eagles on either side of the mural and two exotic birds in the middle, loosely based upon parrots, the birds of paradise. When I was coming up with the concept, I needed to find something that would use the amount of space that I had been given to create and also had a big impact as you went by."

Bamber says they are hoping more of these murals will pop up over town.

"I would love to be able to work more and see other artists have the opportunity that I did, to get their art out there. For me I grew up in Woodstock, so it was absolutely wonderful to put a mark on something in a place that I grew up."

Bamber has a Bachelor of Fine Arts and was thrilled to be able to contribute to something in her home town.