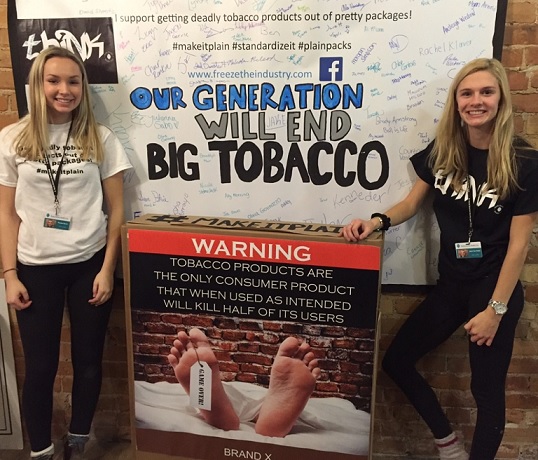 Photo Courtesy Perth District Health Unit (Rachel Klaver and Nicki Van Bakel (left to right) with their banner of support filled with signatures from their peers and a mock-up of a plain pack.)

A group of teens is telling big tobacco to stop dressing up a harmful product in fancy colours and flashy gimmicks.

PERTH - A group of teens is telling the tobacco industry to butt out one signature at a time.

Perth's THINK team is touring with a banner emblazoned with the slogan 'We will be the generation to end big tobacco' as they push for plain packaging.

"It would prohibit any specific branding, colours, fancy foils, shapes. They would all be the same colour, size, and the warning labels would take up the majority of the pack."

O'Donnell is impressed by the drive exhibited by these teens.

So far they have already collected more than 150 signatures with plans to continue touring. This is part of a nationwide push for change.