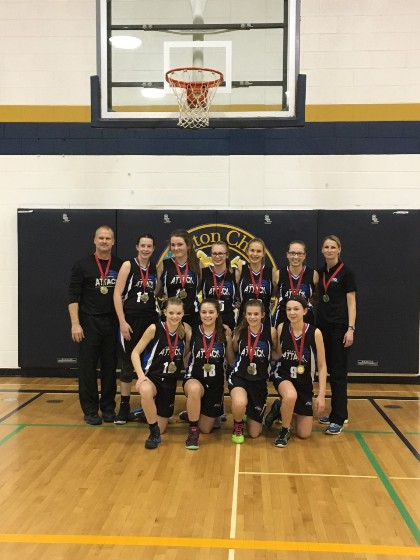 Attack U-15 girls won gold this weekend at an OBA sanctioned tournament in St. Catherine's.

ST. CATHERINE’S - The Oxford Attack Under-15 Midget Girls team braved inclement weather in their travels to St. Catherine’s on the weekend and came away with a gold medal in their first OBA sanctioned basketball tournament of the season in the St. Catherine’s CYO Running Rebels AA tournament.

The Attack girls won the championship game in thrilling fashion relying on their full court trapping defence and half court 3-2 zone to stymie the Rebels for a come-from-behind 50-43 victory.  Brianne Kunderman, Jaime Magoffin and Hannah Cowan nailed a combined 12/18 free throws in the 4th quarter to seal the win as the Rebels began to foul to stop the clock. Kunderman had a game high 22 points for the Attack as she played the point on the Attack full court press.  As her Attack teammates further down the court stole the ball they repeatedly found Kunderman ahead for easy baskets to begin the comeback.

The Attack opened pool play against their local nemesis, the London 86ers, who defeated the Attack 40-39 on a last second basket in an exhibition game one week ago.  This opening pool game was of extreme importance as both teams knew a loss would prevent the other from advancing to the eventual cross over gold medal game.  As expected, the game was a back and forth affair.  The 86’ers used their height to dominate the boards and interior post play while the Attack girls’ used their quickness and full court trap to create turnovers and easy baskets for themselves.  Beth Ewing hit a late 3-point shot to put the Attack girls up and they held on for a narrow 40-38 win. Amanda Witmer and Alexis Birch had 6 points each for the Attack.

The Attack next faced an over matched Orillia Lakers squad in pool play and the Attack won comfortably in 46-29 victory.  Jaycee Gilbert netted 6 points for the Attack and continued her great defensive effort and improved point guard play.

The Attack completed pool play against the short-handed Port Colborne Hornets and dominated the game with great defence winning 46-16.  Olivia Kirkwood and Emma Hagen-Johnson each scored 5 points with inspired play all weekend long.  Gillian Worrall recently joined the Attack Girls U-15 team and contributed inspired defence and rebounding for her team.

Next up for the U-15 Attack girls is another sanctioned tournament in Brantford early in the New Year.