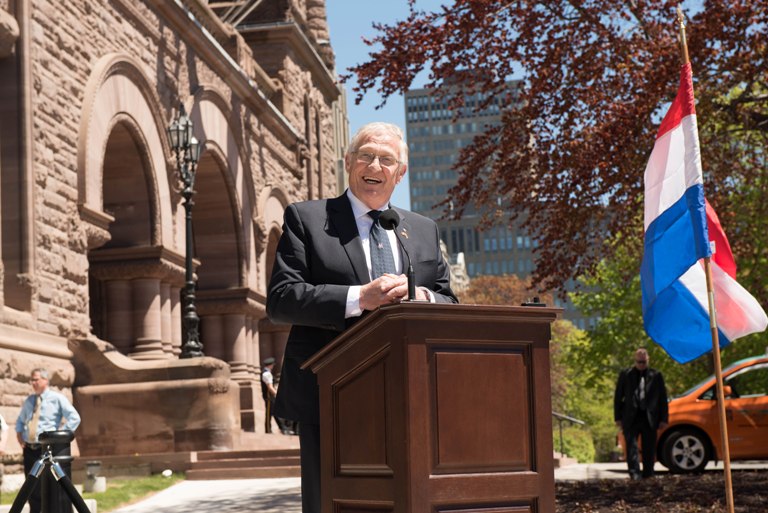 Ernie Hardeman was one of the speakers at the 6th annual Dutch Heritage Month flag raising at Queen's Park.

Oxford County MPP Ernie Hardeman was one of the speakers at the 6th annual Dutch Heritage Month flag raising at Queen's Park.

For the past 6 years, the Province has raised the Dutch flag alongside the Canadian one for one day to honour those living in Ontario with Dutch heritage. Hardeman tells Heart FM what he talked about at the ceremony.

"Well my message on Dutch Heritage month of course is to recognize the contribution of the immigration of Dutch people coming to Ontario and particularly in Oxford County. In Oxford County, it's primarily in agriculture that they came, as did my family, we spoke about that and also the contributions those families have made to make the mosaic culture in Ontario better and better."

Also in attendance yesterday was the Consul General of the Kingdom of the Netherlands Ann Van Leeuwen.

Hardeman explains how this event got started 6 years ago.

"The 5th of May is Liberation Day in Holland, when the Canadian solider's liberated from German occupation and every May the Dutch General comes to Queens Park for the ceremony and a member from each party brings greetings at the event and of course for our party for the last 6 years it has been my opportunity to bring greetings on behalf of my Dutch constituents.