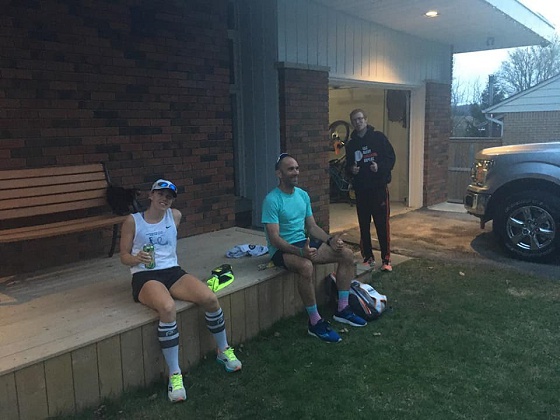 Nelson has already raised $2,367 and donations keep coming in for the local Alzheimer's Society after the ultra runner did something truly remarkable, completing 3 1/2 marathons in 1 day.

WOODSTOCK - It took nearly 16 hours in a somewhat surprising early April heat but Amanda Nelson finished her goal of running 88 miles in one day.

Nelson did this run for her grandfather to raise money for the Alzheimer's Society of Oxford County. Donations continue to trickle in today and at last check she had raised $2,367.50. Nelson ran for her grandfather last year doing 87 kilometres for his 87th birthday. This year she decided to up the the ante doing a remarkable 88 miles for his 88th birthday. This works out to 142 kilometres or about 3 and 1/2 marathons.

She didn't do this run alone. One of her good friends Mickey Scott was right there with her throughout most of the day running 116 kilometres himself before throwing in the towel. George Papadakos also showed up to offer his support and ran 67 kilometres with her too. Papadakos made headlines in January as he attempted to run a marathon every single day to raise funds for the Alzheimer's Society. Injuries kept him from his goal but he did manage to run 16 marathons in one month, which is phenomenal. Of course, we can't forget about Amanda's best friend, her dog Molly who also ran with her for 44 kilometres. She also had a team of helpers all day made up of family and friends, making sure she had plenty of water and snacks, including her husband Danny Nelson who provided us with constant updates so we could share the story with the public.

"My grandpa was diagnosed with Alzheimer's several years ago, and although it’s been a steady decline, it’s been hard on all of us to see my Grandpa struggle with his greatest fear in life, to lose his mind. I can't even imagine how hard it is for the people who suffer from Alzheimer’s to adjust to the COVID-19 protocols."

Nelson started her journey around 4:00 am on Saturday, finishing up just before 8:00 pm. It took her 15 hours and 42 minutes to run the 88 miles. She was able to get a lot of the running in during the morning hours and slowed down a tiny bit in the afternoon, as the mid day heat really started to take it's toll. Nothing could deter Nelson though as she finished strong.

Nelson did a 9.6 kilometre loop around her neighbourhood and would check off a mark on her mailbox every time. She also recorded the kilometres on her smart watch.

Donations continue to come in today and you can show your support online through the Alzheimer's Society here.