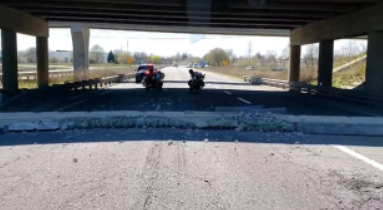 Brantford Mayor Kevin Davis says the Province is the one responsible for all repairs, inspections, and maintenance for the bridge.

BRANTFORD - Brantford Mayor Kevin Davis says the City is not responsible for the recent damage to the Wayne Gretzky Parkway 403 overpass.

In a social media post, the Brantford Mayor said the bridge and the highway are now open, and it's the province that owns the bridge. All repairs, inspections, and maintenance are to be done by the Ministry of Transportation.

Major damage to the bridge was previously caused in January when it was struck by a large piece of transported construction equipment.

Furthermore, the mayor said that since January there had been 40+ emails sent from the city to the MTO urging for the repair work to be done as quickly as possible.

The original post from Mayor Kevin Davis can be found online here:

Full details on the crash that caused the concrete to fall onto Highway 403 can be found online here: